---------
Hi!
Cinema 4d 14.034   ///   W7 Enterprise 64   ///   Video - Amd 6850
_<_o:p_>_&n;_<_o:p_>_o:p>
I've noticed bug (error) in Cinema4d TRIANGULATE function (tool).
As we know, model containing certain number of Quads/NGons can be completely divided by triangles in different ways/manners.  Triangulate tools/functions provides most optimal, in terms of "Overall Triangles Quality", division, i.e., that functions/tools provides maximum possible triangulation quality. Quality of a single triangle characterized by a minimum triangle angle, thus less minimum angle Ã  less quality (sometimes this quality determined by a (triangle area)/(longest triangle edge) ratio, but this ratio directly linked with minimum angle). The definition of "Overall Triangles Quality" can be slightly different in disparate treatment, but it's not necessary to go into various complicated technical details and describe all nuances. It's important to know, that in some certain cases all triangulation algorithms gives (must give) the same certain result, despite the difference between definition of "Overall Triangles Quality" used in this algorithms, otherwise algorithm/function/tool is incorrect.
Next will be shown simple figure which has two possible triangulations, but according to any of existent triangulation algorithms and common sense, only one of two triangulations is correct. This figure is represented by quadrangle (quad) in triangle shape (see the attached "Quad1" picture). 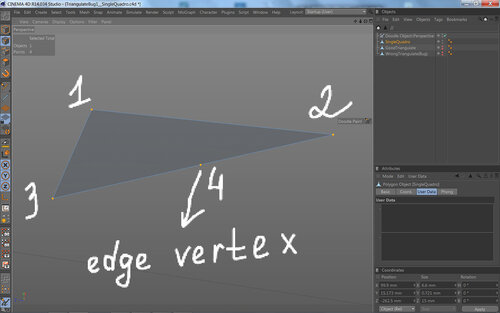 One of quad vertices lies on triangle shape edge, this vertex hereinafter referred to as "edge vertex". There are two triangulations possible (see the attached "QuadTriangulationVariations" pictures) :
_<_o:p_>_nbsp;
1. Vertex 1 connected to edge vertex (4). In this case we obtain figure consist of 2 relatively good (in terms of triangle quality) triangles.
2. Vertex 2 connected to vertex 3. In this case we have "ultimately bad" 0-Area/0-Angle/edge-shaped triangle based on vertices 2/3/4(edge vertex) and one relatively good triangle based on vertices 1/2/3 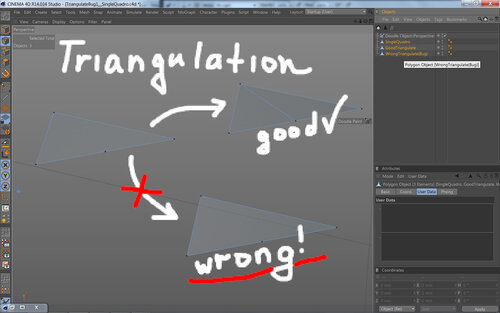 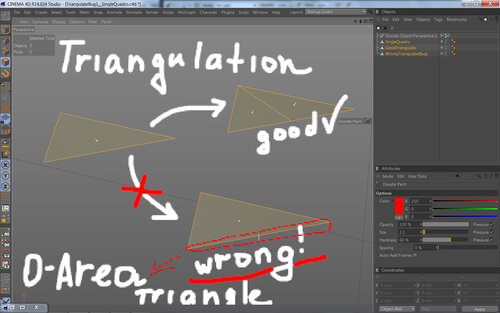 As stated above every proper triangulation algorithm and common sense gives us first way of triangulation as correct and second as incorrect, because in second case we have ultimately low overall triangles quality.

But I have noticed that Cinema 4d under some circumstances may triangulate wrong way.
I have built a figure that consists of quads which described above (see the attached picture 2). 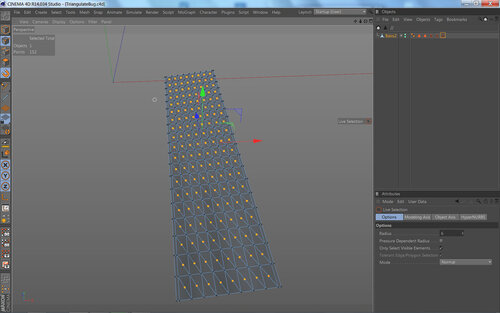 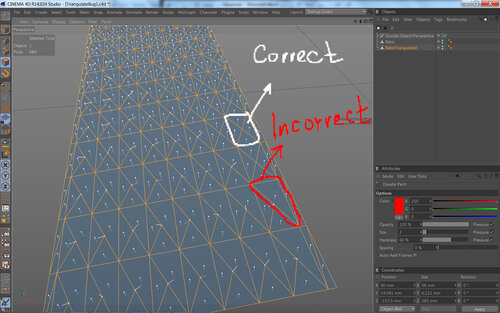 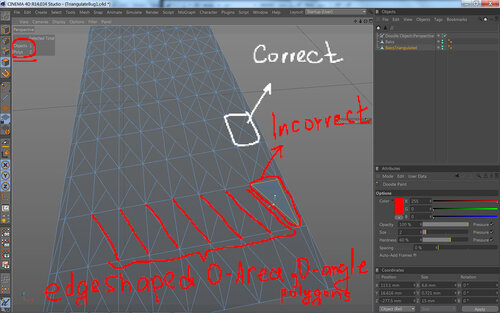 You can assure that this bug occur and repeat it using attached scene (TriangulateBug1.c4d). There are 2 objects in this scene, first before triangulation (Balcs), second object (BalcsTriangulated) is object Balcs after triangulation. You can triangulate Balcs by yourself – select all polygons (or select none), right click – triangulate, - and behold!
_no_<_o:p_>_"">
All the Best!

these are the c4d plugin development forums. the bug report subforums are for sdk/api
bugs not for c4d application bugs.

Hi Ferdinand
If it will address to

What i am going to accept or not does not matter, as i am not a maxon employee. Only
a maxon employee can answer your questions correctly, i just wanted to stress that it
is very unlikely that your posting will be answered here.

Use the email support and/or the bug report form on the homepage.

No, you're wrong. This site is specifically for support for plugin developers for Cinema. What you are describing is a possible bug in one of Cinema's tools. No-one here can do much about it; you need to report it to Maxon via the usual bug reporting method.